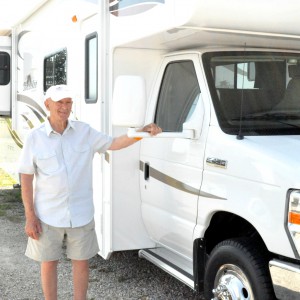 Henry went shopping for a motor home to take in comfort on a highway tour of Canada, and found there were none to be had in Western Ontario. The only established motor home dealer at that time was located in Toronto.

So he visited Canada’s first RV manufacturer’s show in Toronto, found a unit he liked and made an offer. The manufacturer’s agent told him the unit was for sale to dealers only. “I became a dealer on the spot. I had to buy five Triple E motor homes to get the one I wanted. I figured I would sell the other four.”

And, the rest, as they say, is history.

(Excerpted from Ed Krawchyk’s article in The London Free Press, Saturday, May 3, 1980)

Henri was granted Triple E franchise, considered to be the best Canadian built RV in the 70’s and the first motor home seller in the London area.

Henri built a show room that held ten motor homes, for the next fourteen years where he sold and serviced the Superior Coach motor homes.

Henri retired from the business for three years and spent time travelling, camping and fishing.

Henri needed a break; he once again decided to stop working and retired for the second time.

Soon enough, Henri started to miss the business life and opened a brand new business, Airport Motor Homes where he currently works with his family. His passion is finding the best RV value; selling the best brands at the lowest prices.